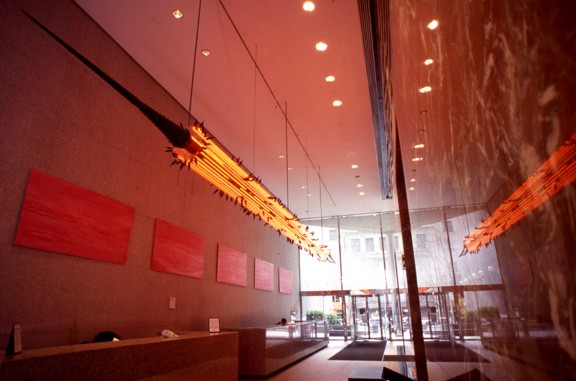 I was asked to do a sculpture for this space in an office building that is across from the Rockefeller Center in NYC. The idea for this piece had been brewing on a back burner in my mind for a few years, and I decided this would be a good place to accomplish it. The idea came from a number of sources. First, Gatling guns, that are still being made, were the first machine guns developed for the Union side of our Civil War in the 1860s. The idea was to have many rifle barrels arranged in a cylinder, so the barrels had a chance to shoot, eject the spent shell, be reloaded, and cool as they were cranked around to the firing position. Such tools of war have been one of my fascinations since childhood, and this devise, in every reiteration, looks fearsomely simple and lethal. Today’s bombers, fighter jets and helicopters use this same approach in what they call rotary cannons to destroy tanks and murder what often turn out to be civilians. And those occurrences are beamed into our living rooms.

The second source for the sculpture is the presence of the nuclear facility that we can see from our bedroom in Vermont. Until recently, there were 89 control rods, suspended in a pool of water 70’ above ground, which were producing the heat to drive turbines for electricity. It is amusing that we would wind up in a place where we could actually see the place that produced the electricity that my sculptures feed on. The third impetus for “Tron” was watching the footage of our ability to guide missiles into Middle Eastern windows. Because they have different ideas. The fourth factor that enabled the “Tron” idea was the hundreds of feet of red Cold Cathode light I retrieved from one of my public art installations that had to be removed for Boston’s Big Dig project. Always looking to economize, not waste, and turn unfortunate events into something positive, these thousands of dollars of red tubes of gas have instigated all the sculptures that have and will be in my sculptures that use them.

I thought that I could get away with all of these associations if no one asked what my intentions were. Because it was made for the space proportionally, in both size and physical presence; and was in the color scheme of the red granite walls, I thought it would make an interesting addition for people who don’t do a lot of reflection and interpretation. I also made red paintings that appeared to be snap shots of maybe Mars to suggest that this device was out there in space. At the pointed end, the form looks like it has quite a bit of use on it, as if it was a chipped and no longer a smooth tool bit. (That would be hard to see, as I often include details that are obscure or not visible. I like that we see the moon so often, but not with the degree of detail that we would have if were walking on it – I am after that allure.) At the tail end, I do vaguely suggest a squids shape after pumping itself through the water.

Squids move easily in both directions, and my sculptures often are meant to look like they do as well. (One of my key sources for all my work is the 1954 movie I saw as a child of “20,000 Leagues Under The Sea”. In that movie, a giant squid battles with the submarine.) Well, the sculpture was approved by the art people (who often see things through Formalism) and a contingent of the building staff. I was most pleased that these people who keep the building functioning were very excited. This was not just a perplexing work of art for them; it was a working thing that solved all the technical issues with cool looking, custom made solutions. They embraced this new thing as something they had never seen before and could not have come up with.

I am not claiming they would like it better than a Gatling gun. I also thought that this being NYC, the buildings office workers were more aware of the world, culture and inured to odd ball stuff. I also didn’t realize that the head of maintenance had been in the hospital when the approval process went through. When he came back, he referred to it as HIS building and threatened to quit. And there grew a group of dissenters who were creeped out and wanted it down prior to its 3 month duration. While I was installing it, it was clear that yet again, people hated or loved it. I quit doing public art because I do not need to be liked or need majority approval. There is a fundamental difference with public art that people have to live with, and art in a museum, where people are seeking out a new experience, and can leave when they wish.