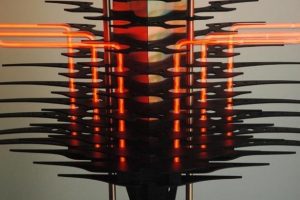 I have always been interested in, and adored animals. I have loved a continuous mix of dogs, cats, birds and hamsters. I watch nature programs and am well aware of how various life forms have evolved to take advantage of every food source and environment. Animals have also had important roles in past cultures. But animals seem to be scarce in contemporary art. And I am very distressed that animals and insects are being driven to extinction worldwide. Perhaps out of sight, is out of mind, or in our human species narcissism – they are just pets or food.

In building my parallel culture, I have made a number of animal forms, but most have been smallish. For Samothrace, I invented a hybrid crested bird with a long beak that ends with a raptor’s hook, and vaguely fox like ears. Just as birds carry food or nesting material, and bees pollen, this mythic bird-like creature carrying tubes of glowing plasma gas is a dream of a unity of man and nature.
There are two art sources for this sculpture. The first, indicated by the title, is the Winged Victory of Samothrace, and the second, but more important to me, is Umberto Boccionis Unique Forms of Continuity in Space.

Both of these sculptures are heroic in concept, and that risk appeals to me because we see so little of that in western contemporary art. This is probably because it turns up in state sanctioned totalitarian art – and since I am proposing a parallel culture – that should be part of the story.

Since moving to Vermont full time, I see animals and insects all the time and humans far less. I have become more aware of the stunning beauty and form following function in nature. And the elaborateness of the beauty seems to go beyond just function, as if it is there for them to appreciate. It is as though they evolved to also be more attractive to their own species. But the subject of beauty in art is such a mine field for three reasons:
First, because of the fear of seduction. You think that is beautiful? What are your standards of taste based on? You believed what he or she claimed? And what about those other mistakes you made in life?
The second is what I call faith based art where you are told to bliss out on this! Don’t think, just empty your mind and just look, really, really, really look until you see it!

The third problem with beauty is that people want to seem smart. And to be smart and sophisticated is to avoid the previous two pitfalls of subjectivity. This means that you are imprisoned by an ideology of ideas. If it has an idea, and the right people have endorsed it, its art even if you derive no pleasure from it. I see that position as being in a loveless marriage of status and convenience.

Well, I am pursuing an uneasy beauty by using the building blocks from nature. All my symmetrical and descriptive forms have a body (that I call a fuselage) that contains organs (transformers, wiring, up-lighting, and support hardware) front and back ends, and appendages that appear to be for locomotion, feeding and information gathering. As you move around the creature or thing you see it changing its density and patterning. This is meant to hold your attention and relates as a metaphor to the vast amount of detail in virtually all life forms. If my sculptures seem overly elegant and maybe ostentatious, you need to re-calibrate your mind and eye, look at pictures and films in any category of nature. You will realize that human creations are often awkward, clumsy, and unimaginative in comparison to nature.