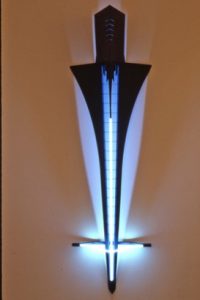 The impetus for this sculpture, “Vader”, goes back to my childhood enthrallment with seeing the armor collection at The Metropolitan Museum in NYC. Soon after that, I started building shields, catapults, a wheeled battering ram and a suit of armor hammered out of steel plates. During all of this, the cold war was being waged with the Soviet Union – we had ridiculous drills at school to prepare for a nuclear attack.

The Cuban missile crises almost went there. It is also significant that I was born close in time to the atom bombing of Japan, and had seen as a child, the films made of these catastrophic events. Consequently, I came to view humans as ominous inventors and destroyers. At that time, I also saw the impressive Dinosaur collection at the Museum of Natural History, so the idea of a mass extinction coming from the sky was, and still is influential.

The tools of war, and the majesty and horror of it’s remains, are central to my formation as an artist. But now the horror is the slow destruction of our whole planet by humans. For an artist to just arrange colors and shapes into interesting configurations or to ignore in other ways what is happening now is escapism and denial.

Back to Vader, the name is borrowed from Darth Vader, as a tie-in to popular culture. This title also sits next to invader well, and again, has me building a now virtual, suit of armor. As before, just carpentry of common building and advertising materials – plywood, neon, acrylic and brazing rods, (albeit transformed) root the sculpture in the world at large, not just the art world. One of the poses for those suits of armor at the MET is with a long sword held in front of the chest with the tip on the ground. I chose to depict my knight in black armor with the neon sword inverted – splitting him in two and penetrating up through his helmet. This gruesome idea is depicted as the kind of noble gesture that one sees in Kurosawa’s films when a Samurai fails. The overall shape also suggests an association with a crucifixion as well as perhaps that famous Abu Ghraib electrical torture photograph that came later.