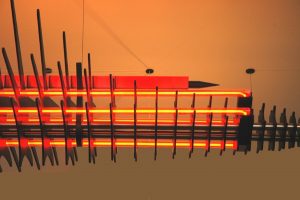 The idea was inspired by time spent at our pool observing the Dragonflies that patrol its surface. Once there was an unusual brilliant red one maybe 1 inch long. I searched the Internet and came up with a Red-veined Darter (in Europe) and it’s not in my insects of New England book. While curious, it didn’t matter; the tipping point had occurred.

The enduring appeal of Dragonflies had to be acknowledged. The four wings of a Dragonfly have such a rapid flutter that the human eye only sees a blur. Take that information and combine an image of when birds fluff out their feathers to cool or dry and you have a filigree.

As in so much of my sculpture, these observations of nature are eventually morphed into a form for sculptures by submitting them to

machines and readily available house building materials. The intent is certainly not to replicate in any obvious, literal way the sources of my objects. If I spent say four years making an exact replica of a Dragonfly, people would probably be very pleased. Much more pleased, with more viewing hours, than they will be by this quasi-relatable thing. But that is the difference between art and craft. Here, you can’t instantly say, it’s a Dragonfly and be done with it.

I want you to linger on the What?

I am looking for that sliding scale, that slippery slope where what it is can never be answered – for the outside border of the familiar. As you no doubt observed the sculpture before reading this text, you could have thought – some kind of fish skeleton, and you would be still on track with my intentions for this thing. A Dragonfly can hover virtually motionless in front of your face while the wings flutter furiously.

This combining of opposites is the central tenant of all my work. A skeletal form is the last remaining vestige of a life. But those vein-like glowing tubes of plasma animate and emanate to revitalize the skeleton while from some viewpoints; the solid forms are turned diaphanous by the light. See this as joining both the artifact and the futuristic, friend and foe, function and fantasy, threatening and sensual.