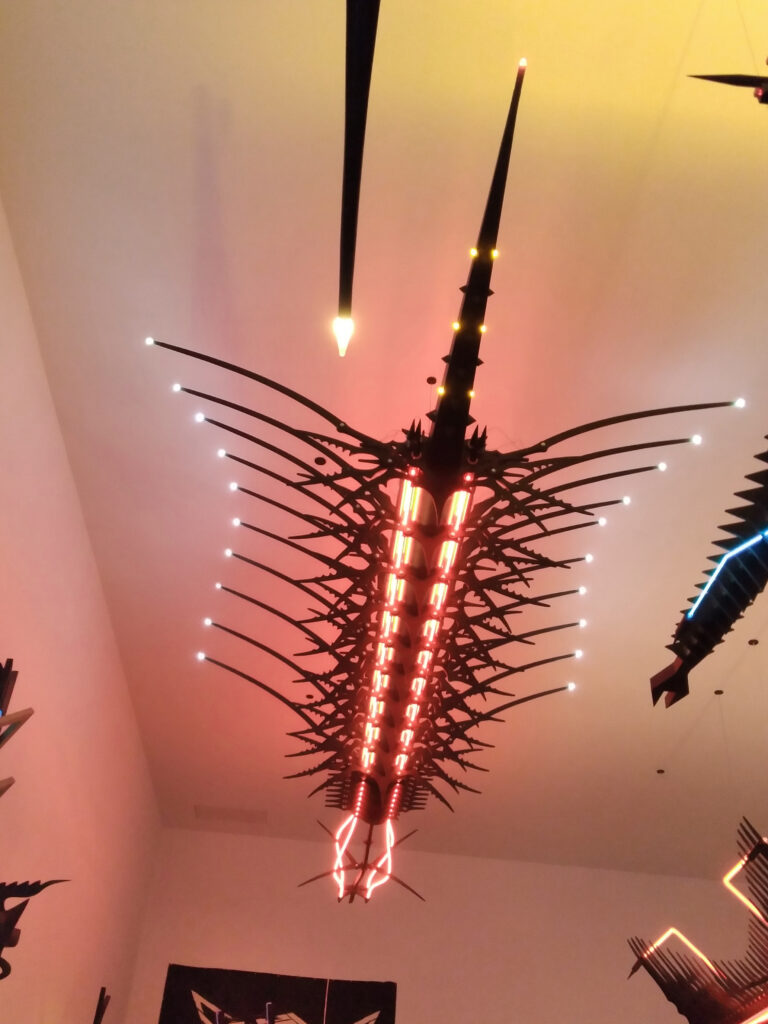 Every sculpture is a mélange of new ideas, knowledge and a lifetime of experiences that perk up to the present when they again become relevant. This sculpture primarily results from the coalescing of three influences – my ongoing interest in biology, new hardware, and perhaps – a strange love.

First, I was reading in one of my science magazines about the prevalence of the many types of Scorpaenidae that go by names such as Lionfish and Firefish, that have numerous poison tipped appendages  for protection – but not to disable prey. Second, while perusing Amazon for small LED lights that could suggest poison tips, I saw tiny, intensely brilliant replacement bulbs for automobile glove compartments. And third, I have been considering making sculptures out of bony looking jointed parts as a continuation of my ongoing melding of the mechanical and biological. (When I first started sculpture, in 1960, Henry Moore was one of the kings, and his late works were based on bones. I had imitated his previous figurative work and his general type of forms).

We have two Yorkies that sleep on our bed with us. Many mornings when we wake up at 7 AM, Elmo likes to stand on my chest, look into my eyes, and yawn. I love looking into his pink and brown mouth with its rows of white teeth shaped and arranged for the capture and processing of food. There is nothing more elemental than staring up into an animal mouth designed to eat meat. And there is the added pleasure of putting a finger in there to have it be gently gripped by molars that could easily break it up and swallow it. Our bond of trust – as a good start for the day.

In addition to all of a dog, as well as all other animals, I also particularly love the hind leg that starts with a powerful thigh that leads backward to a very bony joint, where it changes direction to proceed forward to more joints in the delicate ankle and paw. Off and on during the last fifty years, I have made my sculptures have gestures with either fixed or adjustable joints partly because of the exquisite pleasure I get from this seemingly odd configuration that is so functional that every animal has a version of it.

Thinking about this mix of things made the idea for the whole sculpture pop into my head. It would have movable joints that could be set to various positions later, and small diameter, hot red neon tubes that would pierce straight through the plethora of elaborate structural forms that both grasp the stainless steel fuselage and provide joints for 60 adjustable toothed jawbone shaped appendages. Sprouting out of this almost thorn- like tangle surrounding the fuselage, sleek long slender wing-like forms would be tipped with very bright white LED’s as analogs to the protective poison tips mentioned above. The wires are neatly concealed inside these arms, but emerge near the fuselage to go haywire before entering the fuselage.

While all my sculptures have wires, mostly unseen, I have not used messy wires since the 1970’s. When you look at Lionfish, they are a mess of floppy appendages – probably to look like seaweed.

Numerous drawings aiming for the exact size and nature of the parts led to the use of four small change versions of what could be a jaw shape having teeth – not so much for tearing as grasping at everything, everywhere.

Every Vermont winter for almost 40 years, we have been feeding about 6+ cords of wood into our only heat source – 3 woodstoves. We are also feeding much of the wildlife, so we are very aware of the need everything has to be constantly chomping away to fuel the body against the wet and cold while avoiding being eaten.

All of my recent sculptures are festooned with tools to acquire, probe, feel and flee. But in this winter made sculpture, I went sort of crazy on the jaws.

As in all my other sculptures, there is a front and back just as in nature and movable machines. At the front end of the sculpture, I borrowed the face of an owl, but put four eyes on it to account for the ends of the neon tubes. The armored horizontal beak or probe is meant to convey a forceful tool for making a protrusion – as a suggestion both of a battering ram, and that there are many life forms that have a leading destructive implement either for acquiring food or for battle.

At the back end, I reversed that function, and gave the sculpture a spare, delicate “Achilles heel”- or a gently curved and vulnerable area – just as every biological life form has such an area. Here, four curved neon tubes emerge from the ten structures that they had penetrated straight through for the first eight feet of the sculpture to just rest on four delicate curved blade shapes. Finally, the actual end is tipped by a seemingly defensive looking, but functional hardware configuration containing wires.

This sculpture utilizes over 24,000 volts of electricity. If you were to touch any of the metal parts, you would receive a nasty static shock from the voltage leaking out from the neon tubes.

As this sculpture was motivated by one of nature’s methods for survival – a hidden lethal defensive mechanism – its presentation of a contrast between the gestural flow of the black shapes and the harsh brilliance of the concentrated white and red lights departs from my previous pieces. Whereas my other work is nocturnal and “soft” in its best seen state, this almost too bright to look at sculpture is optimal in a brightly lit or daylight condition.